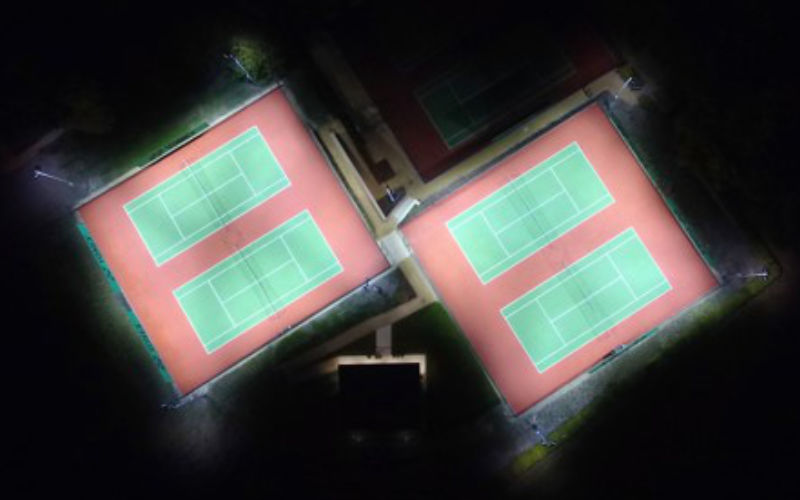 With the sale of the Club’s former site for residential development, Wantage LTC commissioned Nigel Warren of NMW Architects Ltd to deliver their new facility in Memorial Park. The lights were finally switched on in September 2016, with the support of LTA funding, delivering a far better facility than had been previously designed, due to Wiseman’s contribution and the advancements in tennis lighting.

Plans submitted prior to Wiseman’s appointment to the Local Planning Authority in 2012 included a floodlighting system to light the three double courts, using metal halide box fittings on 7m masts. In the intervening period, advances in LED floodlighting technology had been significant. Taking full advantage of these developments, the club was then able to install the most sophisticated floodlighting system currently available to the UK market, which delivered a number of benefits over both metal halide and other LED systems. Other LED options required the same number of columns, although, the solution proposed by Wiseman reduced the visual impact by negating the need for 17 columns.

Eliminating spill lighting was a key aim for Wantage Lawn Tennis Club when introducing LED floodlighting on four of its courts. The finished installation achieves just this in addition to an incomparable playing experience. Steve Thompson, Chairman of Wantage LTC explains further, “The club decided it wanted to be one of the first to install LEDs and not one of the last to install metal halide. We are all very pleased with the outcome and playing under the LEDs is like playing in daylight. This is the best lighting system that I have had the pleasure of playing under and Wiseman have delivered a facility that is way beyond our expectations.”

We use cookies to ensure that we give you the best experience on our website. If you continue to use this site we will assume that you are happy with it.OkCookie Policy